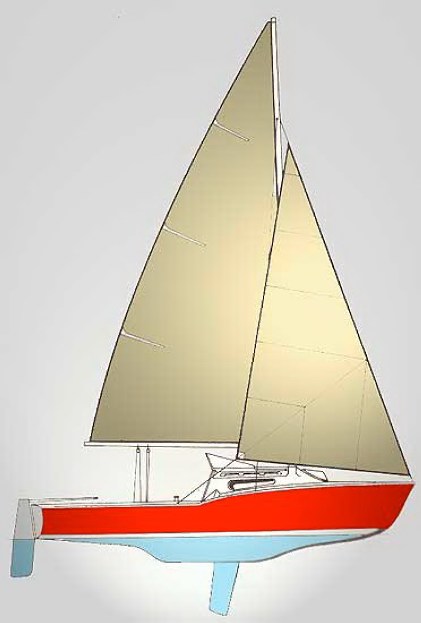 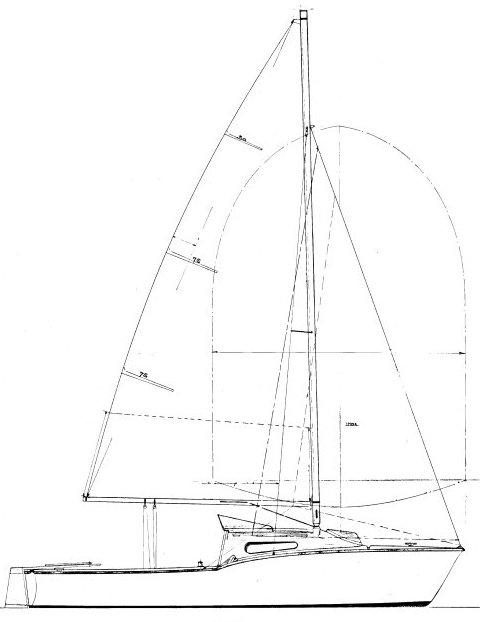 To follow his proven success in producing fast wooden and fibreglass power boats in the late nineteen fifties and early nineteen sixties, Henry Jeanneau then recognised the growing potential of the sailboat market. So in 1963 he commissioned the design of an all new sporting fibreglass sail boat that was to become known as the Jeanneau Alizé - meaning 'gentle trade wind'.

Astutely Henry did not choose a French designer for the project but went to the renowned Dutch naval architect, Ericus Gerhardus van de Stadt, a pioneer of modern yacht design, credited with developing the first ultra fast plywood yacht, as well as the wing section keel and the balanced spade rudder. Notably the van de Stadt "Pioneer 9" had become the world's first series production GRP yacht. 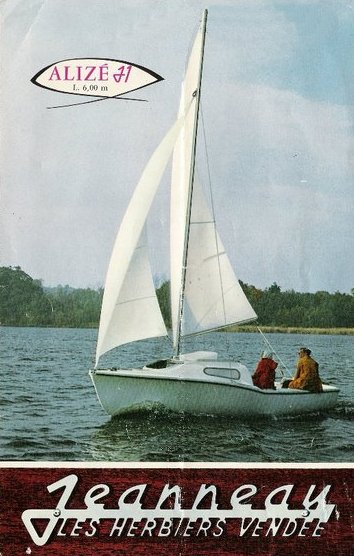 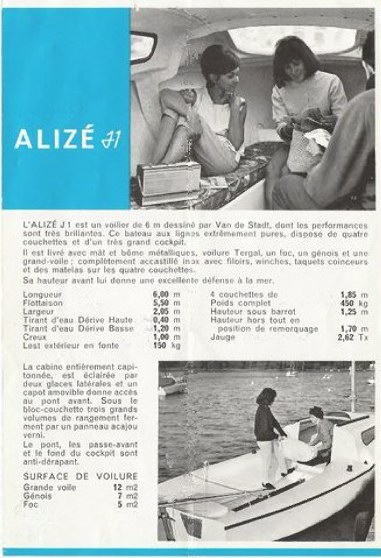 The brief for the Alizé was for a sporty, swing keel sailboat that could be used by a couple staying overnight as well as for day-sailing with a cockpit large enough to accommodate 3-4 adults.

The hull has a very distinctive step in the sheerline. The bow provides a fine entry to a wide beam that is carried well aft before terminating in a near vertical stern and fitted with a transom hung rudder. The hull form is relatively flat bottomed, excepting the ballasted fin stub that houses the retracted swing keel. 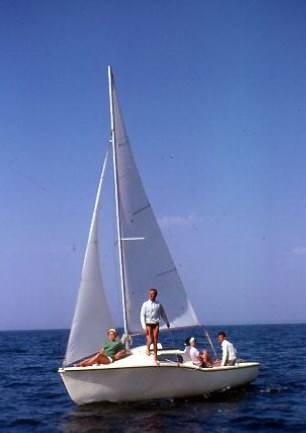 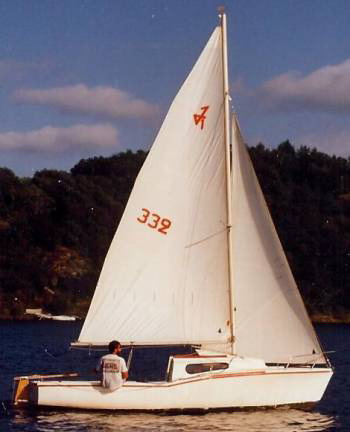 The small cabin has a distinctive large forehatch and provides basic open plan accommodation for two. 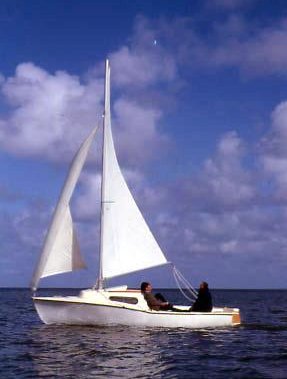 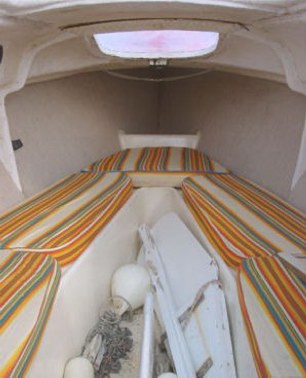 For a 6.00m yacht the design was extremely light with a total weight of just 450kg. In addition to the 30kg steel swing keel there was 120kg of internal ballast.
The Alizé carried an impressive 18.7 sq m of standard sails set on a fractional alloy mast, sail area could be effectively doubled downwind when setting an 18.00m2 spinnaker.
To improve performance and/or aid stability a trapeze for the crew was an option. If pushed to its limits the Alizé can capsize, but two integral buoyancy tanks will prevent it from sinking. 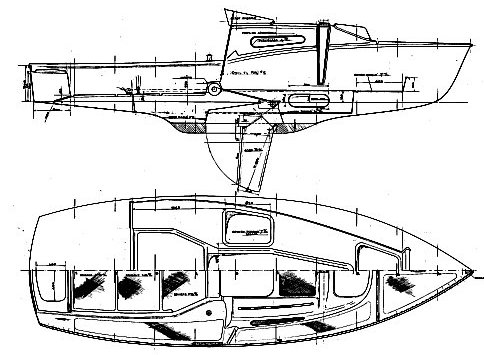 Auxiliary power was an optional outboard - typically a long shaft model of between 3 to 5hp.(Although the brochure indicates that even 10hp was possible)

The Alizé was a great success, readily accepted by an enthusiastic market resulting in around 350 being produced over 10 years before the model being superseded by the Jeanneau Flirt 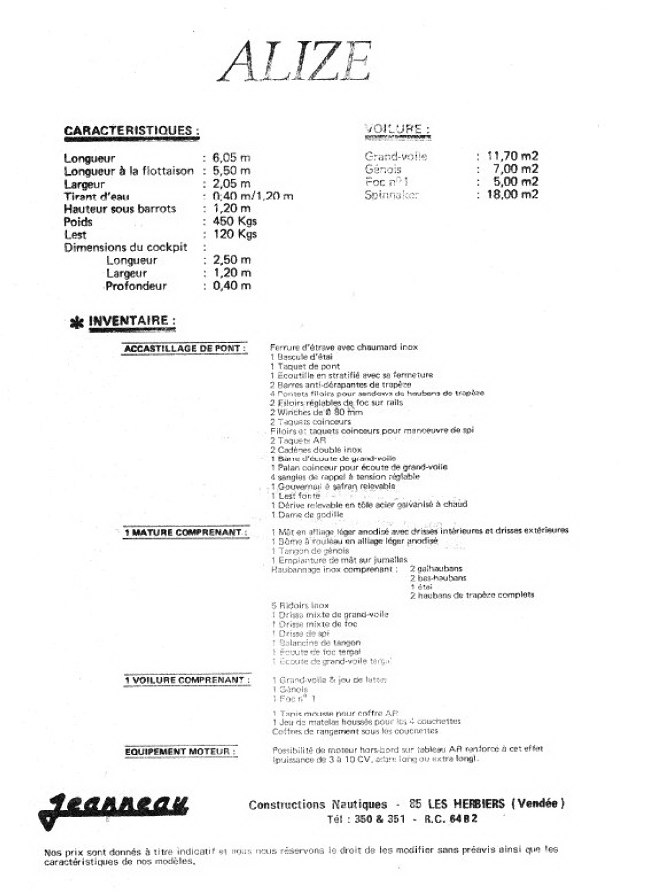 The relationship with van de Stadt and Jeanneau briefly continued with the launch of the 5.00m J-Club dinghy in 1965 and then in 1966 the Jeanneau Storm,which was a very different and more staid 8.30m masthead sailing cruiser, that did not achieve the same commercial success as the Alizé.

van de Stadt later designed a 6,00m dinghy - the Efsix - that has some similarities to the Alizé and which is still actively sailed in the Netherlands

In the August 2014 edition of the Dutch sailing magazine - the Waterkampioen - featured an eight page article to celebrate the 50 years anniversary of the Alizé. 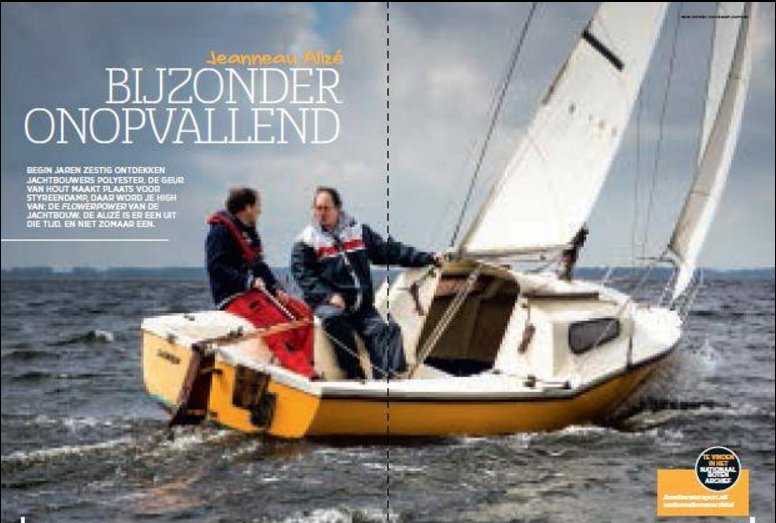 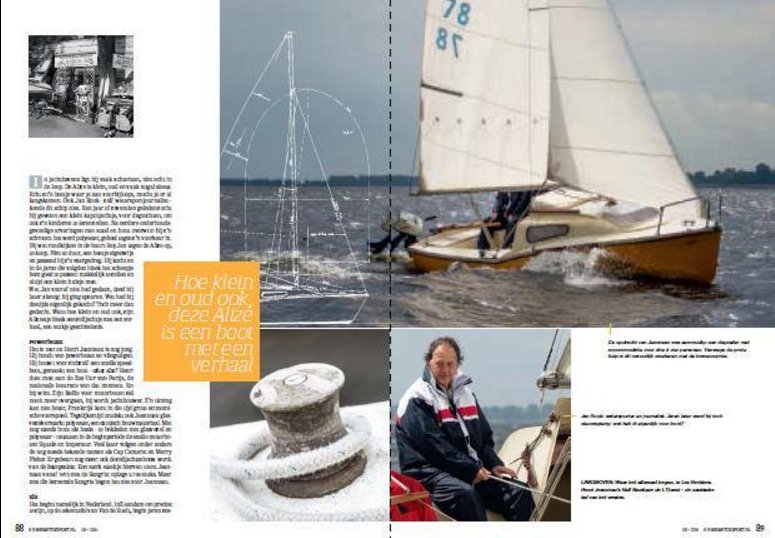 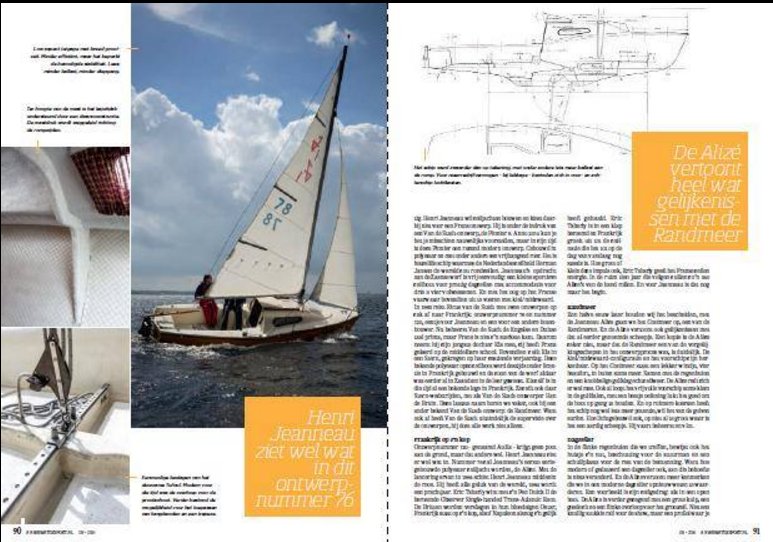 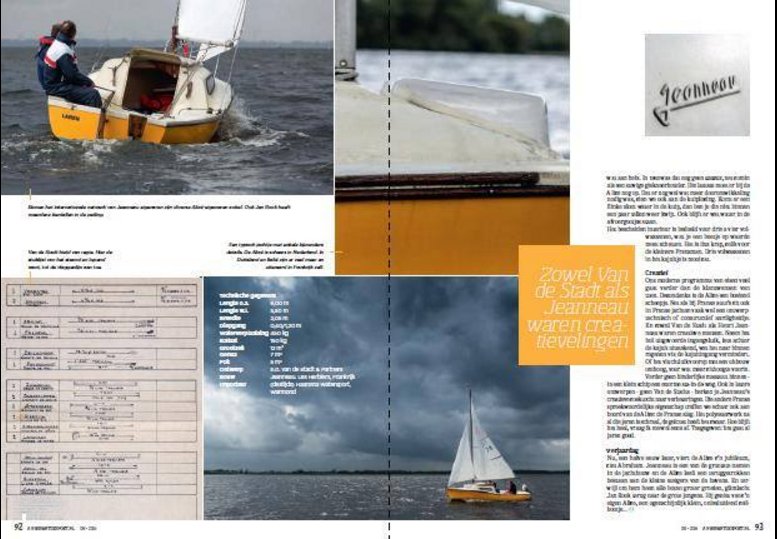 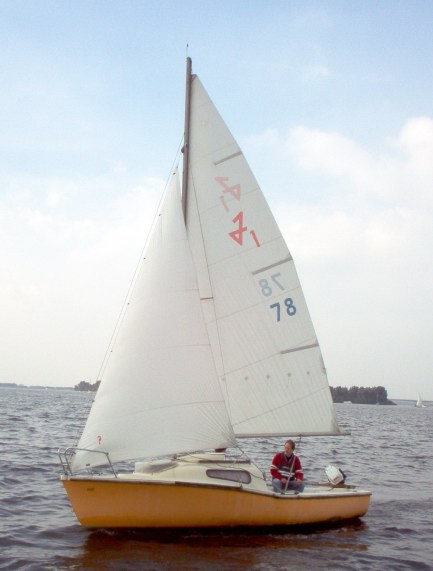 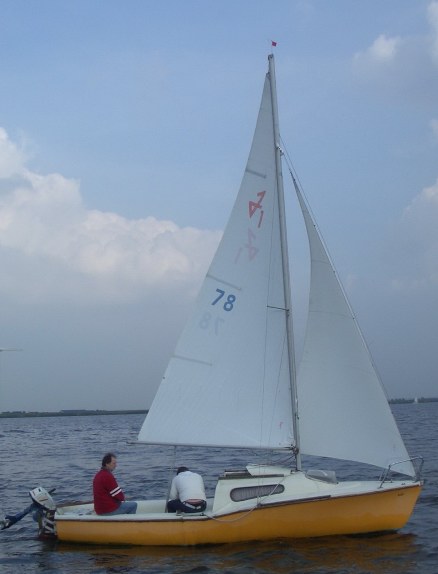 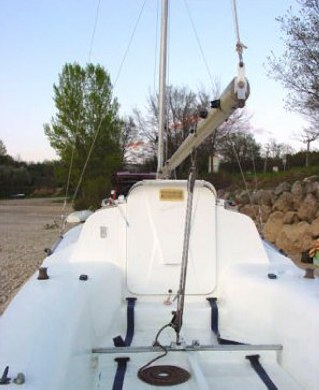 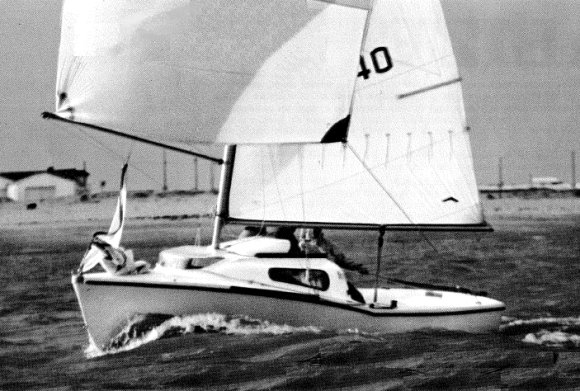 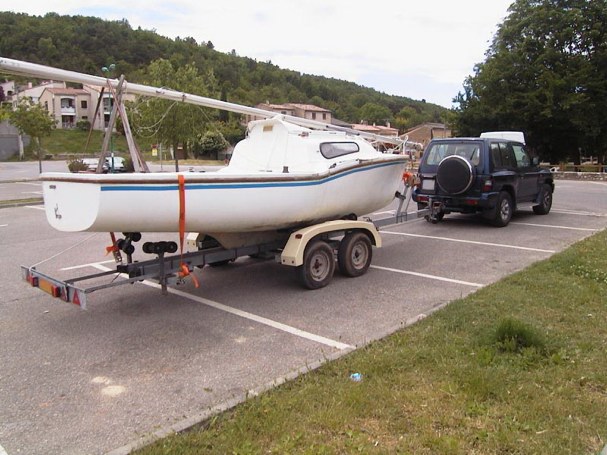 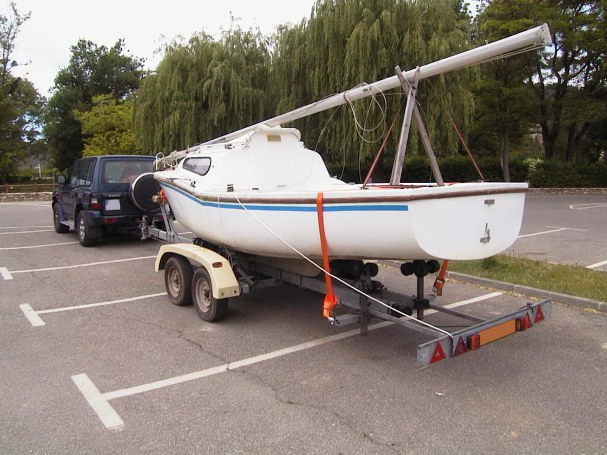 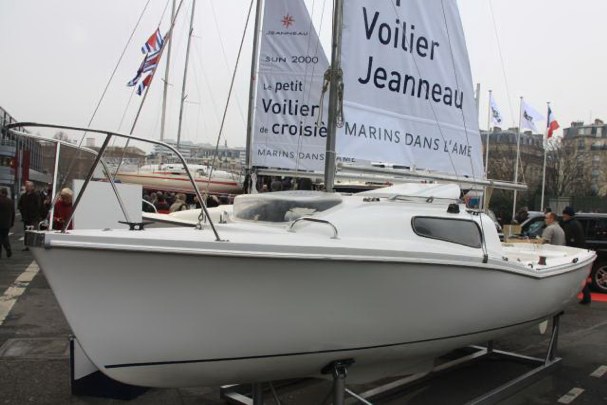 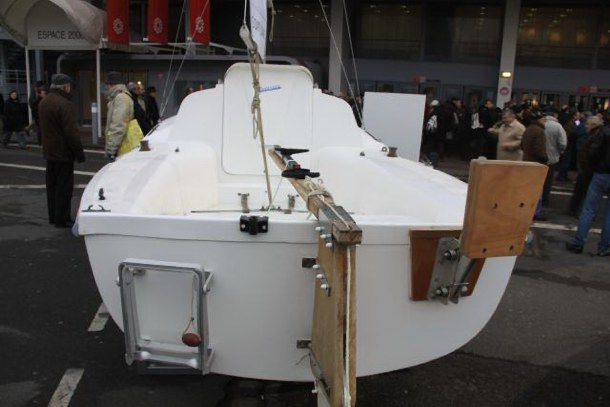 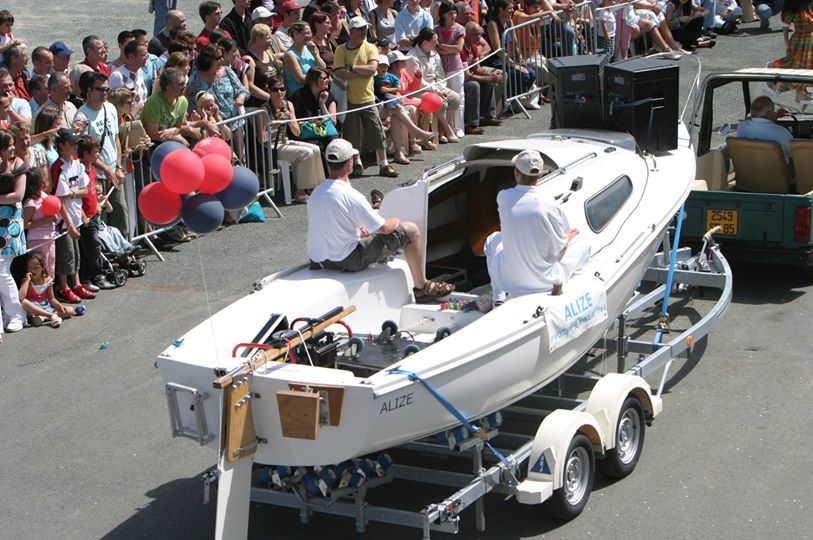